May 17-24, 2019 – 7th Annual National Week of Action Against Incarcerating Youth 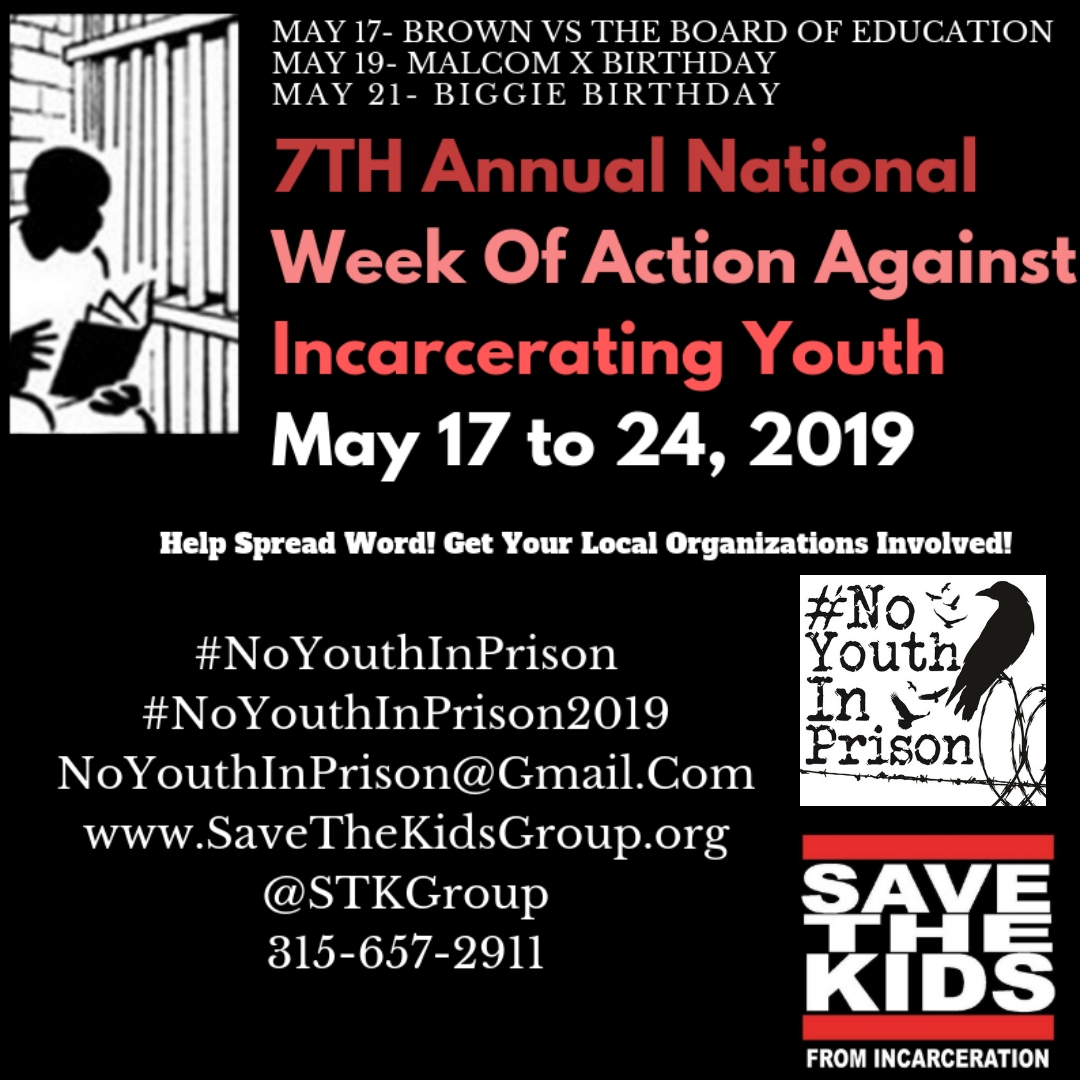 GOALS: Another world is possible, and it begins with community based programs and alternatives such as rehabilitation, therapy, counseling, job readiness workshops, tutoring, more community programs and centers, and transformative and restorative justice programs in the community and in schools to address conflicts. Incarceration is not the solution, but the problem. Once youth are involved in the juvenile justice system, it is hard for them to get out of it. Please support youth and their futures and demand that no more youth are incarcerated no matter the crime/harm they have committed. Incarceration does nothing to address the needs of the youth who have committed the harm.

(1) Criminalization of Youth is the stigmatization of youth through laws and norms that are based on their behavior, dress, socializing, identity, and community they live in.

(2) Policing of Youth is the surveillance and social controlling of youth by law enforcement and those in disciplinary roles.

(3) Punitive Discipline of Youth is the punishment of youth which includes detention, out of school suspension, incarceration, home arrest, and probation.

These three steps need to be eliminated in the juvenile justice system, which is the prison part of the school to prison pipeline.

Print out and laminate this “Against Incarcerating Youth” sign:
https://savethekidsgroup.org/wp-content/uploads/2014/04/Against-Incarcerating-Youth-Sign.pdf

**Segregation through economics is still socially present and is displayed through mass public school closures in poor urban communities, while wealthier school districts are being given more staff and resources.

**Rather than more counselors in communities and schools, we fill them with police and SROs to manage conflicts through arresting youth not listening and giving them therapy.

**With the rise of Ferguson Movement to defend Youth of Color against police brutality, this day is dedicate to addressing the racism in the juvenile justice system and the policing of Youth of Color.

May 21
Thursday – Youth with Disabilities Awareness

**Police, because of their lack of knowledge and skills on issues around physical and mental disabilities, have been more likely to escalate conflict with youth with disabilities resulting in brutalization, death, and incarceration.

**Recently, because of social awareness of sexism and girl empowerment, girls are not submitting to abusive authority and are fighting back against sexual assault from family members and boyfriends. As a result, girls are finding themselves the fastest growing group of youth that are being incarcerated.

**The problem with the current juvenile justice system is it is punitive in nature, promoting mass incarceration, rather than a holistic, transformative, and restorative justice system.

The days of May 17 and May 19 were chosen for four reasons:

(1) because they are close to the time when students are getting out of school for the summer, which is the time when there is the most amount of youth violence and youth incarceration;

(2) because May 19 is the birthday of Malcolm X, a U.S. civil rights and Black liberation leader. Malcolm X once told his favorite teacher that he had a dream to be a lawyer, his teacher replied that was “no[t] [a] realistic goal for a [n-word]”. This caused Malcolm X leaving school and entering the street life of selling drugs, gambling, and pimping. His childhood life is a perfect example of the school to prison pipeline. The National Week holds to Malcolm X’s statement: “Education is our passport to the future, for tomorrow belongs to the people who prepare for it today”;

(3) because May 17 is the anniversary of Brown vs. Board of Education, which ended segregation legally, but segregation still exists today systematically and socially; and

To be a sponsor is free. Just send us a message saying you want to organize an event and be a sponsor.